I can’t believe the year is almost over. What a whirlwind it has been! Before it come to a close, here is some stuff that has given me life in the last month or so….

Interview on Pleasure Activism with adrienne maree and autumn brown

I don’t even know where to start. adrienne maree brown is just a badass bruja, and this interview (conducted by her sister Autumn) had me alternately laughing and thinking deeply and tearing up and punching my fist in the air. Our struggle for liberation isn’t just about stopping injustice and pain, it is about making/taking more spaces for true pleasure. 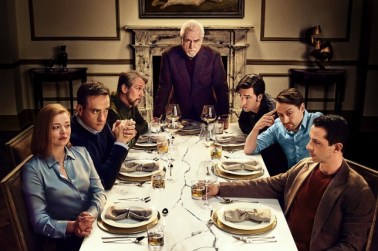 The people on this show are so cringey and oh so petty but I cannot get enough. Also, Shiv’s wardrobe this season was inspirational.

Jerry Colonna and angel kyodo wiliams on On Being

“Queerness gave me the language for everything I know about liberation and freedom.” –  angel kyodo williams on On Being

“it’s an epidemic challenge in our society that we reward, collectively, we reward with approbation, with money, with fame, with success — behaviors that can be so destructive; destructive to the individual, destructive to our communities, destructive to our planet. ” – Jerry Colonna on On Being (https://onbeing.org/programs/jerry-colonna-can-you-really-bring-your-whole-self-to-work/)

I am a sucker for this radio show. Nearly every episode give me lots to think about. williams is an inspirational queer Buddhist leader whose work I’ve been aware of for a while, but this interview was enlightening and inspiring. I’ve been constantly spinning the episode with Colonna. He is a coach to many Silicon Valley leaders, but also actually seems to be a spiritual person with a conscious. A lot of what he brings up is stuff that I’ve long ruminated on.

While my allegiance to social ecology holds strong, I’ve continued to struggle with its lack of intersection with struggles for and scholarship on black liberation.  So it was with great enthusiasm that I celebrated the release of this fantastic book — a collection of speeches and interviews with Pan-Africanist and social ecologist activist Modibo Kadalie, a movement elder that I was not familiar with until a friend reviewed the book for(the also fantastic!) ROAR magazine. The book is full of gems like:

“It’s important to understand that we are all, each of us, scientists and the task of science should be to integrate technology into society in such a way that it provides for an ecologically sound world…”

“…the civil rights and Black Power movements were based upon the inaccurate premise that we were struggling to force America to live up to the true meaning of its creed. America has always lived up to the true meaning of it creed. Its creed is genocide and slavery…no freedom loving person wanted to be a part of the creation of America. They were quite literally resisting or running away from America.”

I am so inspired!